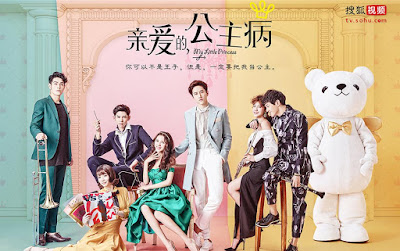 And so, the princess lived happily ever after... only in fairy tales! Lin Xing Chen is smart, straight forward. sassy and has the uncurable "gong zhu bing" or spoiled bratty princess disease. She is rich and beautiful but her life as a princess is far from easy. Always under the scrutiny of the paparazzi and her family, she constantly has to maintain her image and appear confident even when she's not.

She's engaged to her childhood bane Zheng Chu Yao, the rich and handsome heir to a conglomerate. Their engagement is supposed to better their two companies but Zheng Chu Yao is in love with Yu Yang Yang (your run of the mill hopelessly useless Cinderella). Even though she doesn't like him. Lin Xing Chen will marry him for her family. But first she needs Zheng Chu Yao to fall in love with her and agree to the engagement.

Lin Xing Chen enrolls in Zheng Chu Yao's college to win him over. She meets, Jiang Nian Yu, the stoic class genius who is good at everything but always seems to cause her trouble.

In the end will she get her prince charming? Or will her prince fall in love with the underdog Cinderella instead?

Comments (spoilers):
This drama is so good! There's an interesting twist where the heroine is the rich and beautiful princess. The underdog Cinderella character is secondary and you know what, I love it! The main character is straight forward and upfront about everything. When people talk behind her back, she's not afraid to step up and talk right back at them. The Cinderella character is annoying but that's how her character is supposed to be. It's so refreshing to see a strong female lead. Of the two male leads, Mike D'Angelo who plays Jiang Nian Yu is killing it, both with his luscious bod and impeccable acting. There's definitely chemistry between the two leads. The second male lead who plays Zheng Chu Yao has some catching up to do.