Mu Zi Che feels really bad about all the problems that are arising because of the slapping scandal.

No matter the consequence he will take responsibility.

"Oh Really?" Jing Feng says with teary eyes. "I've been fired, are you going to take care of me?"

"You sure? My suits are all tailored, shoes are hand made from Italy, even my toothbrush is imported from Japan"

"I also need fresh roses every time I bathe and a personal attendant when I can't sleep to stay up and talk with me" ha.

You can literally see the sweat pouring from Mu Zi Che's forehead but he sticks to his promise.

Laughing Jing Feng tells him to review a "how not to be so gullible" self help book.

Mu Zi Che counters, he's not gullible but he trusts Jing Feng. Everything Jing Feng says, he will count as the truth.

Mu Zi Che gets the message. Aww you follow her on Weibo?

He rushes to save her and does some Mu Zi Che therapy to have her hang in there.

Jing Feng "persuades" the annoying female lead to apologize and tell the truth or else pictures of your affair will show up in tomorrow's newspaper.

Insert 5 minute Pong cameo that doesn't evolve the plot. She must be really big in the entertainment community. She shows up for a total of 5 minutes, plays no importance, but her picture on the main poster is before Lin Xuan and Ji Ying.

Also wanted to point out how funny they look with all those microphones in their hands. Ha ha. You would think in today's day and age, there would be a more flattering way to conduct interviews.

Thankfully the scandal news has blown over so Ji Ying focuses on the next big event of her life. Acting out a kissing scene with Mu Zi Che. She's so excited she got a special mouth spray to make her breath smell better.

Coyly, she tells Mu Zi Che that she doesn't normally do kissing scenes.

Agreeing, he says he feels the same and offers to tell the director to cut out the kissing part. Ha.

Ji Ying quickly pulls him back. The script was written perfectly and the kiss scene is the crux of their story. They can't cut it out. Haha good save.

But when it comes to the important moment. Mu Zi Che cant do it. He always stops right before they actually kiss.

Seeing him scramble, Jing Feng pulls him away and works some voodoo on him to overcome his mental barrier.

It works like magic as they complete the scene. It's so emotional and gut wrenching, it becomes the iconic scene of the whole drama.

Large screen ads that once had Xie Yi's face on it now only air Mu Zi Che's kiss scene.

He's so popular, he gets stopped on simple shopping trips with his mom. Growing up in an orphanage, Du Fei never had a mom so now as Mu Zi Che, he takes every opportunity to take her on shopping trips and eat dinner with her. Aww.

But it's on this shopping trip that his mom notices something. Because of an old injury, the dead Mu Zi Che broke his hand and wrist so he can't do heavy chores with that hand.

But this new Mu Zi Che easily lifted all the shopping bags with one hand. hmm. Mom's getting suspicious.

No forgetting Jing Feng, Mu Zi Che buys him cologne to thank him for everything he's done. Everything has gone as Jing Feng planned. Jing Feng specifically cast him as the second male lead. The first male lead always gets the female leads love but its the second lead that gets the audiences love. Never thought about it like that but it's sorta true.

Mu Zi Che gets so famous he gets more popularity than the main male lead. And when asked about probabilities with Ji Ying, it's zero. ha.

Unhappily, Ji Ying stalks Mu Zi Che out. Does he not like her that much? Why did he draw a line between him and her.

Mu Zi Che kindly deflects. He doesn't want to pull her into his messy life.

Who cares? She wants him to. 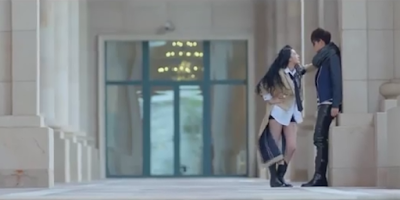 Trying to clear her suspicions, Mom tells Zi Che to open a can. He opens it for her but she's horrified.

Uh oh Mum knows her son's been swapped out.

Had to put my second favorite scene of the episode in here somewhere.

Ji Ying picks up a stray duckling and easily attaches herself and Mu Zi Che in saying they are the duck's Ji mom and Mu dad.

Mu Zi Che tells her not to attach him to her and the duck so easily. She can be the duck's mom but he won't be the dad with her.

Ji Ying gets into a whole speech about how the duck needs to have a whole family. Think about how all the other ducks will look at it when they find out the duck had to grow up in a single parent family. It's not healthy.

Haha just look at Mu Che's face. She even makes them take a family picture, duck and all.

I absolutely adore Jing Feng and Ji Ying. Their characters are so different but so likeable all the same.

Jing Feng plays a tough love, closed figure. He keeps everything to himself but shows his love and concern through his actions and results. He did so much background research on Mu Zi Che that he has a bulletin board with his information in front of his bed. It's borderline stalker/creepish but considering all the other characters in this story *cough* Ji Ying and mysterious benefactor, he's not the most extreme.

Ji Ying is the exact opposite. She's an explosive chatter box who will say exactly what's on her mind. Hence the weibo problems haha. But she also has a clear sense of who she loves and will do anything to be with the one she loves.

Ah. Can't wait for episode 6, the story line is really picking up.