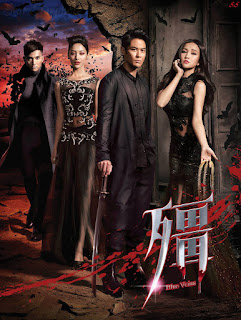 Ying Wut Zeuk  (Kevin Cheng) is an undead soldier who has lived for 500 years with the sole purpose of killing vampires. To protect his identity and the mortals around him, he keeps a distance from the real world, showing up only to kill vampires.

Lam Mo Nam  (Tse Kay) is a good spirited coroner with a single magic power- bringing dead people back to life for one minute. She's direct and will go for what she wants but very small things can annoy or offend her. She keeps a "death note" like notebook on her at all times, jotting down names and events of things that annoyed her. Unknown to even herself, she used to be a vampire. Unlike her peers, she did good deeds and was gifted magical water which turned her into a normal human for a decade. In return, she forgot her past as a vampire.

She meets Ying Wut Zeuk and they develop deep feelings for each other but the water's powers have run out and she starts reverting back.

As mortal enemies, they can never be. But fate has other plans. Will they ever be together?

Tse Kay is a singer in real life and this is her first TVB drama. Her husband, Louis Cheung, has had more screen time, in dramas such as "Gilded Chopsticks" and "Inbound Troubles." Heard a lot of bashing about her acting skills, but I think she's doing a good job for her first time. I really like her character. It's light and positive but really funny at the same time. Her book was the source of many bouts of laughter. And as a side note, she's 39 years old and has a child. I would love to look like her when I'm at that age.

Kevin Cheng on the other hand, his acting has not changed. His mannerisms and quirks have not changed from eight years ago when he filmed "The Seventh Day."
Posted by Unknown at 10:39 AM