Cue our main character, Du Fei, a blooming actor on his way to win best actor of the year.

As he's driving, the car in front of him gets into a car accident but when Du Fei tries to break, he finds they've been tampered with and ends up crashing in as well.

He flies head on through his windshield. His final memory is of his best friend. Xie Yi, insisting him to use his car for this drive. Obviously a set up, poor guy died because his best friend killed him :[

Fortunately he doesn't die but he is immobilized and his face is forever scarred.

On his hospital bed, he watches as his "best friend", Xie Yi, accept the best actor of the year award meant for him. Adding insult to injury, Xie Yi emphatically recite his acceptance speech on live tv.

Xie Yi goes forward to hug Lin Xuan, Du Fei's girlfriend, and she whispers coldly to him "without him, you are nothing." She doesn't know about the sabotage but she sure as heck knows what kind of trash Xie Yi is and props for doing it on live tv.

In recovery, Du Fei has a mysterious benefactor who knows of Xie Yi's treachery. Apart from saving him, he also gives Du Fei a flawless face that's completely different from his original face.

Du Fei vehemently rejects his new image and cries that this isn't him. He just wants his old life back. 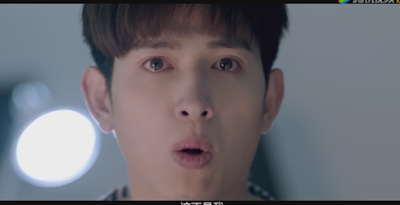 Du Fei gets better in time to see his own funeral. Xie Yi is there obviously keeping up his image. He superstitiously says he feels like Du Fei is watching him. He is! You won't get away with this!

But Lin Xuan is also there. She angrily asks why it's Du Fei buried down there and not him. Xie Yi took Du Fei to Korea for a year and brings him back in a can of ashes.

Xie Yi jealously asks how can she treat him like that. He's her friend too.

With a note of finality, Lin Xuan responds, they were friends once upon a time, but now they aren't. You go girl!

Unable to keep away, Du Fei follows Lin Xuan but gets caught by her. He pretends to be a loyal fan of hers and seeing his face is totally different, she lets it go.

That night, he secretly leaves a bottle of candy to her door. It's their secret practice. He used to give her a bottle every time she felt down. But Lin Xuan just cries upon seeing it. No amount of candy is going to make her feel better.

Hmm, if it's a thing just the two of them do, shouldn't she be wondering who left the sweets for her?

Du Fei has a new identity now. He is Mu Zi Che, the guy in the car accident before him. His family is rich and well off but the old Mu Zi Che has been out of contact with his family so he's able to insert himself into their lives fairly easily.

Insert shower scene where he contemplates how he should take revenge. Nom Nom.

Ji Ying has the most character compared to everyone else.  She's also an actress but with human emotions and actual needs such as eating and weibo (the asian twitter) problems.

Her assistant scolds her for eating a piece of cake saying she will gain 3 pounds. with such little self control. how can she be called a human. Ji Ying quickly quips back, how can she be considered human if she can't even eat a measly piece of cake. Hear hear! Thank goodness there's someone normal in this drama.

In the middle of the argument, she sees Mu Zi Che and chases after him but he's already gone.

Revenge first step: Send the unknowing Xie Yi a picture of his old self to freak the sh*t out of him.

Needless to say it was a huge success.

Ji Ying, as it turns out, is in love with the old Mu Zi Che but he never returned her feelings. Her manager jokingly comments that he can't figure out if Mu Zi Che left the country to run away from her or his mother.

Her manager, bitter jokes aside, is deeply in love with Yi Jing but she refuses him and keeps their relationship strictly business. There's an upcoming drama that she was cast into along with Xie Yi.

Feng Jing is a curt and all business no play director in charge of said drama. His assistants have selected the top 100 candidates to audition for spots in his play. His secretary drops some candidates profiles as she's handing them to him. When she goes to pick them up but he stops her saying those who make it depend on a little bit of luck too, he doesn't need those who have fallen before they've even gotten on stage. Dang talk about hard core.

During auditions, there's no frills or lace, Director Feng cuts into all his candidates. From, you need to find a better plastic surgeon to redo your nose job to we need a young fun celebrity, not someone whose going to make the audience cry. Ha. He's already my favorite character.

When it's Mu Zi Che's turn, his audition wows all the judges, especially Director Feng who personally gives him his pass. Xie Yi who is also on the panel, turns pale as Du Fei once acted out the same scene when they were younger.

Totally freaked out, Xie Yi tells his manager he never wants to work with that person.

On his way out, Director Feng mysteriously stops Mu Zi Che and comments that his plastic surgery was done very well and at least his acting skills are on par before leaving.

The training company calls Mu Zi Che and regretfully tells him his was not offered a position. Obviously that "I never want to work with him" comment worked and they aren't going to take him. 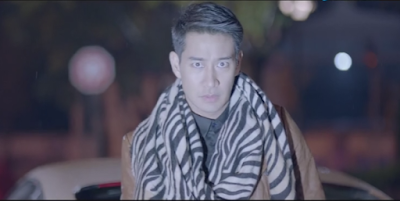