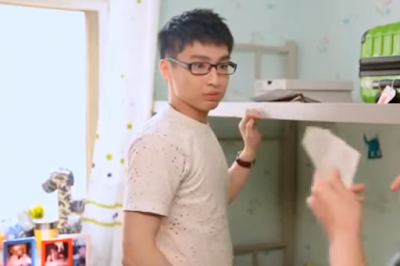 This is Mai Ding; a go lucky and simple college student. On his first day of college, he gets bribed with lottery tickets (one of his many weaknesses). His mission- to ask their mysterious dorm neighbor, An Zi Yan, " Do you like guys or girls?" 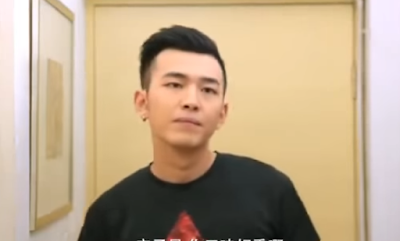 An Zi Yan just stares at him. Ha.

Realizing this annoying guy isn't going to leave without an answer, Zi Yan answers "Guy or Girl, I will eat them up all the same." Nom Nom. 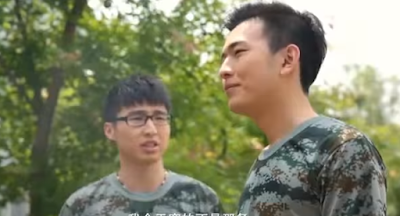 From that moment on, Mai Ding would find any opportunity to close to An Zi Yan. Not because he liked him but because An Zi Yan was a wrinkle in his extremely normal life. When he's old and bald, he can tell his grandkids he knew An Zi Yan, a bisexual. At least that's what he keeps telling himself.

As luck would have it, they share boot camp training together so Mai Ding happily badgers An Zi Yan to eat lunch with him everyday. An Zhi Yan doesn't like or dislike it so he just lets Mai Ding do whatever he wants.

During one of their military drills, it gets too hot and Mai Ding faints but An Zi Yan doesn't do anything to help. Mai Ding confront's him about it "I thought we were friends!" But An Zi Yan responds with a short "they aren't friends". Ohhh maybe An Zi Yan meant they are more than friends wink wink*

One day, Li Ming, Mai Ding's roommate gives him a pair of movie tickets and who else is better to go watch it with than An Zi Yan. At first An Zi Yan straight up says no but Mai Ding persistently knocks on his door until Zi Yan gives him the ultimatum. He'll go with him but after this one time, Mai Ding can't bother him ever again.

Without thinking, Mai Ding easily takes the deal. But it's not a good date. An Zi Yan had no interest in the movie and gave Mai Ding the death glare every time he ate his popcorn too loudly. lol. 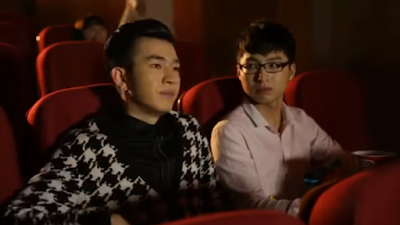 At the end of the movie, Mai Ding is undeterred and happily chatters away asking An Zi Yan what kind of guy he likes.

An Zi Yan responds he doesn't like men and Mai Ding shouldn't believe everything he hears.

Shocked that he was lied to (and heartbroken that An Zi Yan won't possibly like him), Mai Ding is speechless for once.

The next day, Mai Ding comes upon a girl crying in class and tries to comfort her saying she will find a better boyfriend later on. Taking it the wrong way, the girl loudly tells him it's none of his business and even if she did break up with her boyfriend he would never have a chance. Sigh, only Mai Ding would try to do something good but have it spit back at him.

Feeling down and embarrassed, Mai Ding sits by himself. He sees An Zi Yan but doesn't call him, remembering their promise. Instead An Zi Yan rounds back and comforts him in his stoic manner with a few well placed words about just be happy as yourself and don't care about others who put you down. Aww so he does care. 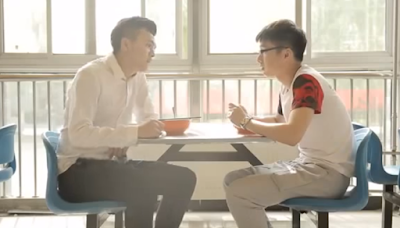 The words work instantly and Mai Ding jumps back to normal (meaning he continually follows An Zi Yan around as his "friend") until An Zi Yan tells him he has a girlfriend. His face visibly turns pale and even though he tries to play it off saying it's normal for a "handsome guy like him to have a girlfriend", Mai Ding is clearly saddened by the news.

That night, he mourns in his room but he doesn't know why he's so sad until Li Ming gives him a questionnaire.

Do you always thinking about this person? Check

Do you laugh to yourself out of nowhere when your're thinking of him/her? Check

Do you hope he notices you? Check

Do you find yourself always wanting to be near this person? Check

Well then congrats. You're in love.

Coming to truth with his feelings but also knowing that An Zi Yan will never feel the same way he cries in front of An Zi Yan's door the whole night.

But the next day, Mai Ding is so embarrassed that he tries to hide every time he sees An Zi Yan. They play a very short cat and mouse game but An Zi Yan manages to catch him easily and asks why he's acting so strangely. Realizing An Zi Yan didn't hear his confession last night, Mai Ding automatically goes back to friend mode and changes the subject. He even offers to treat him to lunch for once. 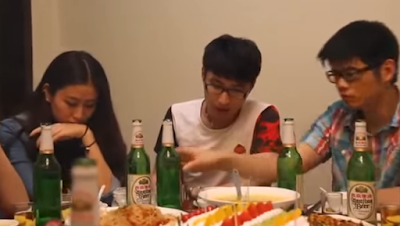 But deep down, Mai Ding is heart broken. He gets drunk at Li Ming's party and sulks the whole time even though it's supposed to be a happy birthday party. Girls hit on him but he just responds "It's no use I'm curved now (not straight)." Haha.

Unable to take him anymore, Li Ming calls An Zi Yan to pick up the drunken mess he made.

Realizing he took it a little too far, An Zi Yan takes Mai Ding back to his personal apartment to stay the night but Mai Ding says he'll stay at a motel instead, He knows they are "friends" but he doesn't want to stay at his place.

Tired of hearing the friend word again, An Zi Yan pulls Mai Ding in for a kiss and tells him to give him his virginity. 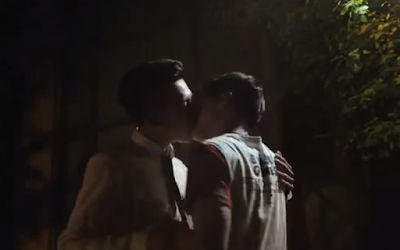 More to come my peeps. The movie is a little long so I separated the recaps into four parts each. Stay tuned every Wednesday!
Posted by Unknown at 3:13 PM