Stranded in the middle of nowhere, with Jiu Wang incapacitated, Peng Peng is left with the important duty of taking care of both of them. She spends the entire night running to and from the river to get wet cloths to put on Jiu Wang's forehead to control his fever.

The next day, Jiu Wang wakes up and says he doesn't recognize her.

Worriedly, Peng Peng thinks he must have fried his brain and tells him she is his brother, whenever they are outside now, he needs to address her as big brother.

Laughing, he clarifies that she's changed a lot, to the point he can barely recognize her.

Grateful that Jiu Wang saved her, Peng Peng vows that they are brothers now, she will be there when he needs her, always.

Jiu Wang, obviously smitten, tenderly smiles as she runs off to get water and food for them. 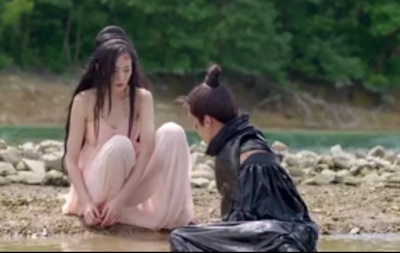 At the river, Peng Peng finds Qi Sheng washed up on the shore. When he wakes, his first words are, "where are your clothes?"

Disgruntled, Peng Peng thinks, you just tried to assassinate me, why would you still care if I'm wearing clothes or not.

Qi Sheng and his guards had won against the assassins but they got lost in the river. He purposely leaves out the big detail that they ended up in the river because Qi Sheng was worried about Peng Peng and insisted that they find her.

Peng Peng leaves him at the river saying she's going to get him sticks and twigs to make a makeshift cast. She runs into Jiu Wang who was worried she might be attacked by wild animals. **She took this path multiple times last night, if she wasn't attacked then, don't think it's going to happen in broad daylight**

Peng Peng starts to tell Jiu Wang that Qi Sheng is there when he gets eerily quiet. Thinking it's a wild animal, Peng Peng cutely closes her eyes and says that if its a bear they can play dead but if it's a lion, they will run on the count of three.

Jiu Wang says they don't have to run. Turning around, Peng Peng sees it's Qi Sheng... scarier than a wild animal.

Tersely, Qi Sheng and Jiu Wang acknowledge each other. Qi Sheng hands his cape over to Peng Peng, still going on about wearing clothes. They correctly guess that the assassins where sent by Zhao Wang, no longer able to take his wife cheating on him, he resorted to killing off his mistress's lover who happens to be his brother. Talk about complicated.

At first Peng Peng can't believe it, Zhao Wang is such a fluff cake, he wouldn't have the guts to pull off an assassination. But thinking deeper, being cheated on can make people do crazy things. At this, Qi Sheng pulls Peng Peng close and brings her into a dip kiss, saying if she ever cheats on him, he will kill her lover... looking pointedly at Jiu Wang. 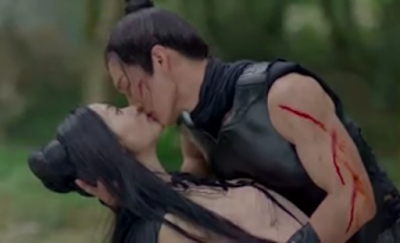 Hilariously, Peng Peng narrates that she's hugged Jiu Wang, gave him CPR and spent the night alone with him already, Qi Sheng doesn't have to worry about it being a possibility, according to traditional customs it's already happened.

A group of people happens upon them but they don't know if it's the cavalry or more of Zhao Wang's assassins. At first Qi Sheng calls them, but Peng Peng stops him saying she's the most expendable one out of the three of them (if they both died, Zhao Wang will be king and the poor citizens will be doomed), so she will take the risk and see if they are friend or foe. Before they can stop her, Peng Peng runs out yelling "If you guys Zhao Wang's people, run back to him and tell him he doesn't have the IQ to plot an assassination" before slipping and falling off a small cliff. Pfft.

When Peng Peng wakes up, she's back at their camp. Luckily, it was the cavalry and they were rescued. She complains that on this trip to Jiang Bei, she almost died N times. Qi Sheng asks her if she knows who tried to assassinate her the first time but worried that he might kill her right there if she pointed him out, Peng Peng just giggles and says she didn't know.

A royal messenger arrives with the news that the current king has suddenly died. Qi Sheng is called back to take his place on the throne. Knowing this assent isn't going to be smooth or guaranteed, Qi Sheng decides to leave Peng Peng in Jiang Bei where the generals are all his trusted officials and will take care of her in the case he doesn't successfully take the throne and is killed. 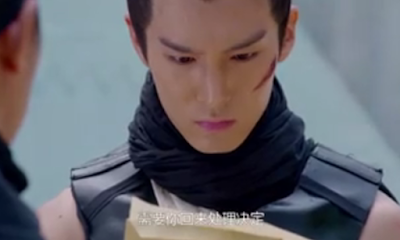 Peng Peng, left at Jiang Bei does not know what happened, Originally, she's super mad that Qi Sheng and even Jiu Wang left her there with nothing but a few servants. Bored, she hilariously practices calligraphy and sings that she can't believe they left her there- even her grapes have turned to raisins. lol. 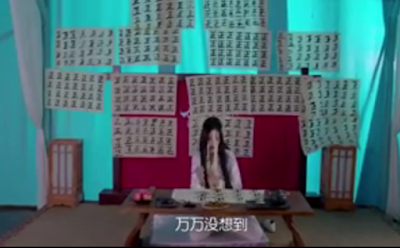 Qi Sheng successfully ascends the throne. He sends Lu Li and Eunuch Chiang to escort Peng Peng back to the capital. Peng Peng, who doesn't know what's going on, is super happy to see Lu Li after such a long time. She says she hasn't smelt another person in such a long time and hilariously starts to sniff Lu Li until she hears that Qi Sheng is now king. 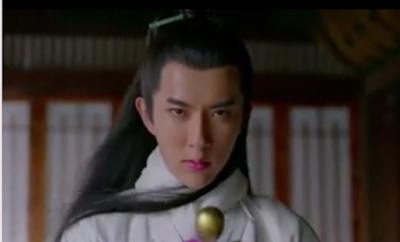 On a more serious note, Jiu Wang is awarded 1000 gold bars and promoted for saving Peng Peng. He asks the eunuch who made the decree. The eunuch says, of course, the king- signifying, Qi Sheng has taken full authority as king. 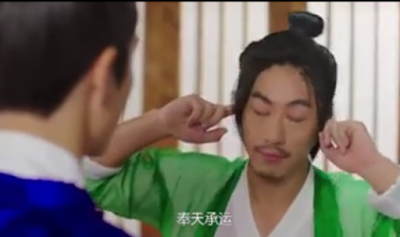 Zhao Wang is pardoned for his assassination, but he refuses to hear the decree. Already drunk, he starts to bully the eunuch. Qi Sheng shows up but it doesn't make a difference. Zhao Wang tells him he would have rather have been killed.

Solemnly, Qi Sheng tells him, one day, he will understand.