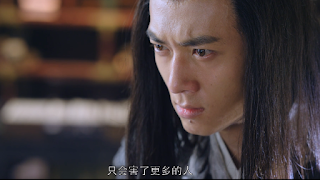 Qing Rou finds Du Gu and tells him to stop trying to over throw the current dynasty. He says he willing to if she agrees to leave with him. Qing Rou refuses and if they can't find the antidote for Yan Qi in a year, she will die with him, 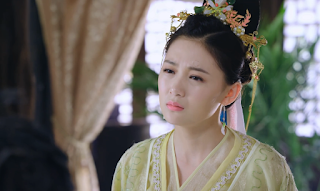 Hearing this, Du Gu tries to kidnap her again. But luckily Xiao Si and General Yin who've been trailing her cut in. Seeing as two against one, Du Gu retreats. Xiao Si chides Qing Rou for running off by herself saying Yan Qi will have his hide if Qing Rou got kidnapped again. 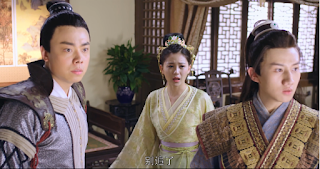 That night, Empress Mu Rong visits Qing Rong to say she's better fitted for being empress. Her achievements with the taoists, the famine and saving the emperor showed that she would be an excellent empress. Mu Ron says if it was her, she would have given Du Gu half the kingdom in exchange for the emperor. 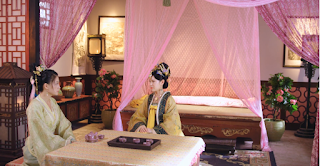 At the same time, Du Gu sets the city on fire. Only the skies are against him too as it starts to rain and his plans are foiled. 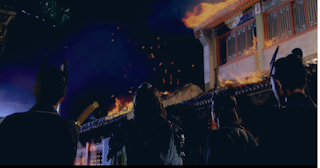 Yan Qi sees Qing Rong sewing a pair of Mandarin Ducks. She says she wanted to sew swans as they are life long partners but no one in the palace knew how to sew swans so she could only sew the ducks. Laughing, Yan Qi promises to be her swan.

He heard about her run in with Du Gu and pleads for her to not run off by herself again; he wouldn't know what to do if she got kidnapped again. 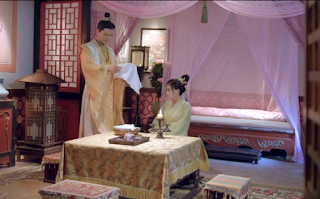 Mu Rong tells Yan Qi she's going to step down as empress and become a nun. 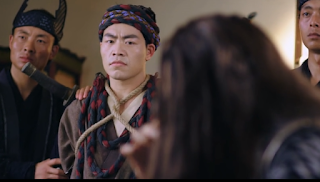 Qing Rou arrives with Xiao Si and General Yin. They have a fight with Du Gu who gets injured. Xuang Xuang runs out to stop them from killing Du Gu and hands over the other half of the antidote in exchange for his life. 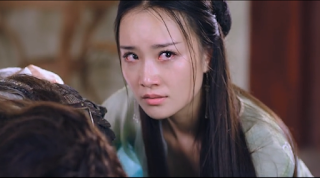 Yin Ran gives birth to baby and Yan Qi asks Qing Rou when they will have one too.

Du Gu ran off after the last altercation and is a little loony now. He hallucinates about Qing Rou and still vows to turn over the current dynasty.

Xuang Xuang lost Du Gu and looks for him now. She vows to herself to not give up until she sees him again.

In court, advisers tell Emperor Yan Qi to take a concubine as it's already been a year and he still only has the Empress.

Yan Qi pinches his nose and brushes them off by saying he only just became emperor and the country is still settling down. To get married again will push financial pressure on the citizens. After saying all that, he quickly dismisses his advisers and turns to leave.

Thinking a moment, he turns back to his advisers and says, "Telling me to take a concubine, you guys aren't afraid of the Empresses wrath?" 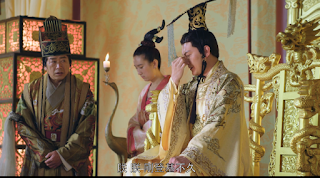 True to his words, that night Qing Rou, now the empress, kicks Yan Qi out of the royal bedroom telling him to sleep in the study.

The next day, the Emperor declares all brothels closed for a month and all royal court advisers can't sleep with their wives or concubines either. 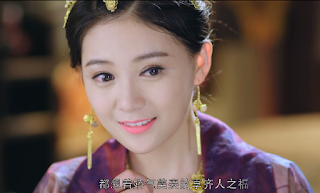 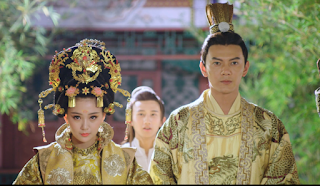 After performing a ritual for their ancestors in the treasury room, Qing Rou looks upon the dragon statue that can bring her home.

Worried, Yan Qi calls out to her when she heads towards it.

Qing Rou touches the switch, but instead of going back, she closes the switch and slowly walks back to Yan Qi.

And like in the first episode, sweetly kisses Yan Qi. 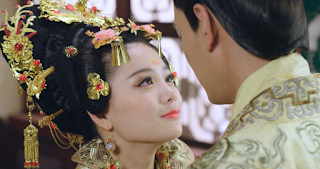