Our heroine, Yin Qing Rou, starts off in a fight scene battling bad guys. She uses her qin and superb martial arts skills to  defeat the evil eunuch.


Turns out she's just dreaming. She's actually the personal assistant of Kong Xuang Xuang, a super star actress. Upon finding her asleep in her own chair,Xuang Xuang kicks up fit. Seems like it's a normal occurrence where Xuang Xuang bullies Qing Rong and uses her "personal assistant" duties to the max.


One day, Qing Rou and her good friend Ah Guang (coincidentally the evil eunuch from her dream), a make up artist, mistakenly run into Xuang Xuang having an affair with an actor.They quickly duck into a cave to avoid them and find a precious gem lodged in the rock.

Happily, Qing Rou quickly picks it up and says if it's valuable she will immediately sell it and quit her job.


Going in a little further, they find another 6 gems encrusted in a dragon fixture. It mysteriously looks like the Dragon Ball Z scene where they have gathered all the balls and can get any wish granted. Seeing the set up, Qing Rou puts the seventh one with the others and quickly makes a wish. Only instead it transports the two away!

Several hundred years before, Xie Yan Qi, the third prince of the kingdom rushes to save his oldest brother from assassination on his horse. It's at this moment that Qing Rou appears falling through the sky and knocks over Yan Qi.

Both of them faint from the impact and surprise. Ah Guang fairs a little better as he hangs onto a branch sticking out of a cliff which shortened his fall. Labeled as suspicious culprits who attacked the prince, the two are carted off back to the prince's estate.


Back at his estate, Yan Qi, awakens only to find his brother is already dead. He wouldn't have made it even if Qing Rou didn't appear. Turns out it was an assassination planned out by his second brother who wanted to be king. 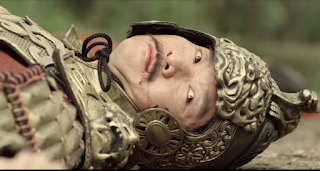 Still suspicious of Qing Rou, the third prince goes to interrogate her as soon as she wakes up.

Seeing a handsome guy as she wakes up, Qing Rou thinks she's in a dream again and gets all goo goo eyed.
Taking advantage of the situation, she even goes in for a kiss!

Infuriated, the Yan Qi brings her to a different room to interrogate her. Still thinking it's a dream, Qing Rong complains that its her dream and they should really be doing what she wants.

They bring in Ah Guang who tries to persuade her that they've really traveled to the past. Still in denial, Qing Rou even laughs and playfully apologizes that she made him the eunuch again.

Seeing that she's not serious, Yan Qi threatens her with a sword but she just scoffs, pushing it away but it cuts her in the process. Upon seeing the blood, she freaks out and faints from the shock.


Waking up and finding out its all real, Qing Rou runs away with Ah Guang. Unbeknownst to them, the third prince set it up so they could escape so he could see if they were spies sent by his second brother.

Seeing that they weren't running to his brother, Yan Qi recaptures them and keeps Qing Rou captive.

Captain Yin, his aide, asks why not kill them or let them go if he's sure they aren't spies. Flashbacking back to when she stole his kiss, Yan Qi irritably says he can't let her go that easily.

Stuck in her room, a maid comes to take care of Qing Rou. With her 21st century mind set. Qing Rong quickly tells the maid not to call her mistress and says she can take care of herself. Apparently that's the worst thing to say as the maid cries and asks what she did to deserve this punishment.

Relenting, Qing Rou let's her do what she wants, and the maid suggests they go to the yard for some fresh air. Qing Rou  acquiesces but gets in trouble when she attempts to eat a dessert she found.

Turns out Yan Qi's cousin (who is very infatuated with Ren Qi) made them. The bratty princess quickly tells her maid to slap Qing Rou as punishment but true to her personality, Qing Rou quickly defends herself and almost hits the maid instead.

The princess sees Yan Qi and demands that he make sure the "maid" is punished. Yan Qi smirks and says shes actually a guest so they can't punish her.

Seeing her stoic cousin displaying emotion for a girl makes the princess jealous and she instantly plots on how to get rid  of Qing Rou.

Unable to take it anymore, Qing Rou packs her bag and gets ready to leave.

She gets stopped by the guards at the front door. She resorts to begging Yan Qi to leave, but he isn't moved.
Unperturbed, Qing Rou tries sneak off at night. She scurries about in her dark clothes hilariously stopping midway to rip off her mask. She comments on how people in the past are ridiculous and how its impossible to run and breath with a cloth mask on.